For many middle-class Canadians, home ownership is a benchmark of personal and financial success. For a single woman, self-employed, and working in the arts, being able to get it together to buy a house solo is a huge achievement.

Karen Hines, a beloved performer (POCHSY) director, (MUMP and SMOOT) and writer managed to do just that.  In 2006, she bought a home of her very own in Toronto.  Then her real estate dream turned into a nightmare.

I spoke with Karen as she, and designer Patrick Lavender and Kelly Reid were taking a break from busily transforming performing/art space Videofag into what she described as "a murky psychological space - kind of a dessicated Ikea showroom."

For the next few weeks, Hines will be using the deconstructed zone of domesticity she and her collaborators have created, to perform CRAWLSPACE, her latest play, based on her brief, expensive, and ghastly experience of home ownership in Toronto.

It all began when, at the end of a very successful year professionally, Hines decided to jump into the white-hot Toronto real estate market. "I felt queasy right from the start. I did all the things you are supposed to do. I worked with an agent (played by Georgia Beaty). I got a home inspection: but, certain elements didn't feel right. Small things turned into huge problems."

Hines chronicled her experience with the house in a National Magazine Award-nominated article for SWERVE Magazine, "MY LITTLE HOUSE of HORRORS". The play, however, is not a straight adaptation of the article.

"Creating the show has been a very organic process. Sound is a huge part of the environment. We've built this dream showcase room, and we're inviting 15 people a night into the space to have a salon experience.  I want the audience to have the feeling of being invited into my living room.  It's a lived experience."

"I have a great team!  John (Turner) who I've known for 30 years directed. Mike (Kennard) helped create the sound.  Then I have all these great, fresh young artists like Jordan (Tannahill) who invited me to be part of the Videofag season, and who consulted with me on the script."

What made buying the house such a terrible life experience?

"I needed things to go perfectly: and they didn't. The dream is: you're going to create this beautiful space, a showcase.  You're going to have all of this security. The reality is how much it costs to repair things."  A pause.  "An overheated market is fueled by greed, property lust, flippers who know what to do to make a house look perfect. I want to create a space to explore all of the emotions that arise in that kind of intense situation.  Buying a house is very emotionally driven."

Hines said," I now live in Calgary with my wonderful boyfriend.He has been enormously supportive and helpful. I am still recovering from the experience." So at least  Hines ended up with one dream, and found a prince.  Phew!

Not only that, the show she's created out of her real estate nightmare is a hit! 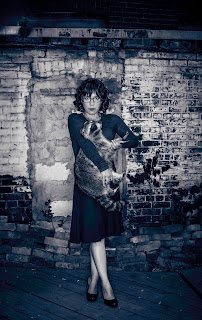 Hines' willingness to go to the dark side of  home ownership certainly seems to have struck a chord with Toronto audiences.  Her two week run had nearly sold out before she opened. She's added performances on September 28th and 29th to accommodate demand.

Hines and company's CRAWLSPACE, is a white hot Toronto property. Jump on the bandwagon and get a ticket, if you still can.


Posted by Celeste Sansregret at 10:04 AM No comments:

REVIEW: EMPIRE HEATS UP THE SPIEGELTENT


Recently, a new building popped up in my neighbourhood.   It's a sleek, stained glass and wooden structure, with a windowed cupola in the centre of the roof.

Then, posters went up along the fence. The building is (mercifully) not the sales office for yet another waterfront condo project. It's a Spiegeltent, a portable structure invented in the late 19th century, and constructed to house a circus or other spectacle. In this case, the show is EMPIRE , the smoking hot adult circus by the New York-based SPIEGELWORLD company.

Last week, a circus-loving pal and I ventured into that cool-looking wood and glass structure at the foot of Rees Street on Queens' Quay, to take a peek at the goings-on inside.They are well worth a visit.

Velvet and wood booths interspersed with graffiti/street art influenced paintings line the walls. Inside that, rows of very comfortable folding wooden chairs and areas of little cocktail tables and seats surround a circular stage, beneath the centre dome. The interior feels like a cosy early 20th century New York saloon, complete with a bar at the back, where you may obtain popcorn and libation.

As the audience settles in, performers flaunting stylish costumes and outlandish characters float around the room, interacting with each other, and the audience: flirting, playing, seducing and gradually, completely immersing us in the world of the show.

It's quite a show! The production is an inventive and dynamic mash-up: part vaudeville, part Weimar cabaret, part Times Square street theatre and part naughty Vegas-style nightclub act.  Jaw-dropping acrobatics and stunt-performances, underscored by guitar-driven pop-rock vocals are punctuated by some very risque comedy. A vaudeville style couple who appear willing to try anything once ensure, among other things that you may never be able to look at a banana in the same way again!

The entire production is incredibly sexy: edgy, glamorous, playful, inventive, and beautiful to look at. It's also incredibly romantic. As I watched the duos and trios perform their most high-risk feats, it was their trust in each other, and their commitment to their art that stayed with me, long after my walk home.

Leave the kids at home, and take your best beloved, or that hottie you've had your eye on, and go see EMPIRE.  If a night in the Spiegeltent can't get you out of the friend zone, nothing will.

EMPIRE continues from September 1st in Toronto in the  air-conditioned and licensed Spiegeltent at 318 Queens' Quay West at the corner of Rees Street and Queen's Quay. For dates, times, tickets and information: http://spiegelworld.ca/the-show/

Posted by Celeste Sansregret at 1:00 PM No comments:

INTERVIEW: S&G Has a BLIND DATE with REBBECA NORTHAN

When I pick up the phone to call Rebecca Northan, I feel super-nervous.  An interview with someone I've never met and don't know, is, after all, a kind of blind date:  and Rebecca Northan is the reigning queen of the blind date.

It's easy to understand why.  On the phone, she's open, and easy to speak with. Warm, affable, charming, a little flirtatious:  in life, Northan's a perfect date, which has worked out rather well for her.

When she opens this week at the Tarragon, she'll be on her 400th blind date in seven years. She played six weeks in the West End of London. Kevin McCollum, producer of RENT and AVENUE Q, produced both her US tour, and her off-Broadway debut in 2010. Both her previous runs at Harbourfront (the last, five years ago) sold out.

How did this mad, wonderfully successful show start? At the invitation of Tina Rasmussen, the artistic director of World Stage at Harbourfront, who asked Rebecca to come up with ten minutes for the SpiegelTent.

"I saw what they were doing in there, and it was, well, hot!  Sexy, risque...I was in nose ( that's clown-speak for the familiar red nose) and I thought, "How do you do a hot, sexy, clown show?

Well, for starters, by being  a French clown in nose. "Yeah, you know, French girls... and by going on a date with a different guy every night."

"The first time, was in the Spiegeltent, and then, it grew from there."

So how do men react to being asked on a date by a clown?

"I think the nose gives me a certain freedom, and lets me get away with more. It also gives the guy's actual date, if he has one, some security, you know, that we are playing, and that I'm not actually going to run off with him! We, my team and I, go to great lengths to make sure, if the guy has come with a date, that the woman feels safe, and is taken care of."

"Well, for instance, when we we were in Winnipeg, I had a date called Warren, who was there was his wife.  It was opening night.  I usually wear a red dress for the date, but she was really freaked out by the dress.  Apparently, Warren really has a thing for women in red dresses.  She asked me if I could change dresses for my "date" with her husband.  Fortunately, it being opening night, I had another dress- not red - backstage for the party afterward.  I changed, and the show went ahead!"

Does she have any clue what is going to happen, or is she, more or less, in control?

"No, it's a collaboration, something we call spontaneous theatre. I create the evening with my collaborators, my date, and my team. We do the show with an outline, but I'll throw it out if something comes up." Like?

"Well I work with scenographers Christy Bruce and Kristian Reimer,and Jamie Northan, my brother, who creates the sound. Christy and Kristian come up with the props, create the scenes, and play the other characters;  if we need a waiter at a restaurant, for example. We just did a show where the guy wanted us to go on boat ride for our date.  It was my first request for a boat ride date in seven years!  My scenographers had to come up with a boat for us, or at least something like a boat!"

Has she ever been on a blind date in life? "No! The whole time I've been doing this show, I've been in the same relationship, with the same man. I think it would have been too hard: to be that vulnerable both in my work and in my life, at the same time." A pause. "At it's heart, BLIND DATE is a love story. A perfect execution of the show is fun, surprising, moving, titillating and sexy - in a frame of consideration, openness, and respect. Single guys who have been my blind date onstage have had single women from the audience give them their numbers after the show.  The audience really gets to see who both people are - at their best."


There used to be a lot of stigma attached to blind dating. Now, with the proliferation of on-line dating sites and apps, many, probably most single ( and a few not so single) people have gone on a blind date, at least once. Still, any, and all dating remains scary: vulnerable, intimate, hopeful.

What, I wonder, has Northan learned from her seven years of blind dates? "I can't get used to be stared at!  That's just something innate in primates!" A laugh.  A pause. "I'm a much better listener - and I've learned to take responsibility for my partner. We say, my crew and I, that as a team, during the show, we are on our best house-guest behavior: thoughtful, attentive, considerate and fun!" 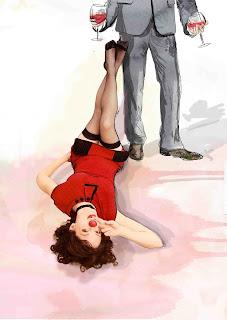 BLIND DATE opens at the TARRAGON THEATRE, 30 BRIDGMAN STREET, on September 8 and runs until Sunday, October 4th, with performances from Tuesday through Saturday at 8:00 PM and matinees at 2:30 PM on Saturdays and Sundays.  Tickets start at $15 for rush seats. To book seats or for further information call Patron Services: (416) 531 1827.


Posted by Celeste Sansregret at 10:11 AM No comments: