The unseasonably balmy weather last Wednesday was perfect for opening night of THE ALIENS, Annie Baker's gorgeous gift of a play about male friendship.

Set in the warm and heady time between high school and thirty when everything still seems possible, THE ALIENS is a poetic ode to everyone "on the road to nowhere".

A couple of drifting dreamers, both pushing 30 spend their shapeless days hanging out: Jasper(Will Greenblatt) is an edgy, Bukowski devotee and aspiring novelist and KJ (Noah Reid), a music-loving college drop-out with mental health issues. Jasper just got dumped. KJ still lives at home with his granola mom.

KJ and Jasper have a band, they've had innumerable bands, and there's a very funny sequence where Jasper rattles off the various considered and discarded names for their outfit. KJ loves mushrooms and is always trying new ways to ingest his drug of choice.

Their place in the world is a picnic table in an alley that dead-ends behind a local coffee shop in small-town Vermont. They aren't supposed to be there. The restaurant's new dishwasher, Evan (Max Crumpler-Haynes making an astonishing debut), a seventeen year old boy with a mop of red curls and a face like a flower is tasked with kicking them out. He's studying music, so that doesn't happen. Instead, Evan starts sneaking out to join them.

The narrow confines of the Coal Mine Theatre are put to excellent use by designer Anahita Dehbonehie in Baker's subtle marvel of a play. KJ and Jasper are at a dead-end in their lives.  They're almost unemployable: hovering in the small space between artistic ambition and a desolate future behind a chain-link fence somewhere worse: the bottom echelons of a mall, a factory, a hospital or a prison. They fantasize about hitting the road, but their only actual trips are the result of substance ingestion. Sometimes talent and imagination are enough to propel someone out of a life of limited options, but more often than not,they aren't.

"Heaven is a place where nothing ever happens" said the Talking Heads. Something does happen in THE ALIENS: randomly and devastatingly, and when it does,the finite limits of time and possibility hit both characters and audience like a tsunami.

Director Mitchell Cushman and his talented actors do a marvelous job of bringing Baker's near-perfect script to life. This is a play with a lot of pauses and small bits of business.  Not one moment went on too long or seemed extraneous or affected.  THE ALIENS is close to theatre Heaven.

Over at the Tarragon Workspace, Christopher Stanton reprises Will Eno's lyrical TITLE and DEED. The tiny space is made more even intimate by the use of lamplight. Stanton and his director Stewart Arnott gracefully depict a man so sensitive and so uncomfortable in the world, he seems ready to crawl out of his own skin. Stanton's character may be homeless in life, but Stanton, the actor inhabits the text and the character completely. The delicate poetic play is also well worth a visit.

Two great shows in a week:  the Toronto fall season is off to a flying start. 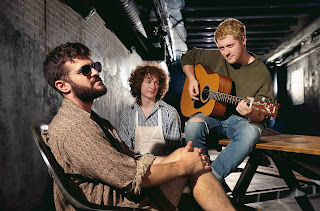 September 19 – October 8, 2017
Tuesday – Saturday @ 8pm
Saturday and Sunday @ 2:30pm
All tickets $22 + service charges
A portion of the house will be held as Pay-What-You-Can on Saturday matinees
To purchase tickets please visit tarragontheatre.com/show/title-and-deed/
(*please note there is no performance on Friday, September 29)


Posted by Celeste Sansregret at 3:54 PM No comments: