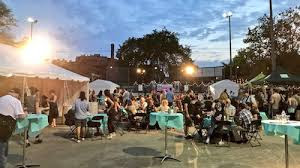 Posted by Celeste Sansregret at 2:29 PM No comments:

How do you know your Fringe billet is soon to arrive?

The rubber vomit in the mail should have been my first clue:  SHOULD is the operative word in this sentence.

Two weeks ago, a plain brown envelope arrived at my office containing a back-page -of the comics slab of rubber vomit.  Who the hell would gift me with a 10 year old boy's idea of a joke? No sender except for Amazon and some random gag supplier in Las Vegas.   A weekend of paranoid speculation ensued as well as a number of long, deep conversations about strategies for dealing with harassment.

A week later, I'm on Messenger with Penny Ashton.  She's my billet/Fringe guest this year.  Her promo materials arrived ahead of her - at my office as we arranged.  "Did you get my small package?"  she asked.  Oh no. I expected the posters, fliers and magnets but had totally forgotten about the parcel.  "Was it rubber vomit?"  I asked?  "Yes!"  I needed fake gruel and I thought - vomit - perfect!"  I sheepishly confessed to having returned it to sender with no note.  "Did they not put my name on it?"  No, because if they had, I would have known it was a prop.

I should have known:  as those of us who have been hanging around these festivals for a few years can tell you:  anything can happen at the Fringe.

What to see at a festival that now offers 160 shows over eleven days?

Here's a few thoughts, organized in order of venue.

A PETE N' CHRIS-TMAS CAROL
The beloved Fringe faves are back with a Dickens send-up.  I'm interested to see what the lads do with the literary great's most popular tale.

DELIRIUM
The lanky American storyteller returns with a tale he says is "search for meaning."  He five-stars and sells out a cross the country.  A number of people have told me they think this is one of his best shows. He also co-stars with his wife Vanessa Quesnelle in a thriller MOONLIGHT AFTER MIDNIGHT,  which is billed as both a mystery and a romance.

MAGICAL MYSTERY DETOUR
Gemma Wilcox is a physical performer of astonishing dexterity and precision, well worth watching.
She regularly sells out in Winnipeg and Edmonton.

OLIVE COPPERBOTTOM: A NEW MUSICAL by Charles Dickens and Penny Ashton
Ms. Ashton is not only my room-mate for the duration of the festival, she that rare combo platter of talented writer and skilled performer.  I can't wait to see her sing, dance and act her way through this parody of Dickens.

JAMES &JAMESEY IN THE DARK
The admired British comedy duo are back with more high-stepping ridiculousness. I find them very charming.

ROUGH MAGIC
My friends, apt 613 reviewers Barb Popel and Brian Carroll told me this was a favourite show at the Ottawa Fringe this year.  I quite enjoyed WEIRD this company's take on the Scottish play and I look forward to seeing what they do with a fanciful tale about the relationship between Ariel and Caliban.

6 QUICK DICK TRICKS: A DIRK DARROW INVESTIGATION
Magic meets comedy meets noir:  how much Fringier can you get?

BAD BABY PRESENTS: RULES CONTROL THE FUN
I always enjoy Janelle Hanna and she's working with Briana Brown who is a fine director.  I look forward to seeing her clown turn.

IN SEARCH OF CRUISE CONTROL
James Gangl teams up with Chris Gibbs.  Gangl is an excellent comedian and a terrific writer.  this will be well-worth seeing.

WEAKSAUCE
Storyteller extraordinaire Sam Mullins returns with a show I hope I finally get to see this festival.

THE SEAT NEXT TO THE KING
I always check out the winner of the Best New Play competition.

TEN CREATIVE WAYS TO DISPOSE OF YOUR CREMAINS
Playwright Rose Napoli is a good enough reason for me to be there.

GRAHAM CLARK'S NOT HERE
Graham Clarke made a show out of a phone book.  This time he's apparently not even showing up.
I guess we'll have to go and see.

MULTIPLE ORGANISM
Mind of Snail Puppet Company is beyond fabulous.  If you've never seen them, here's your chance.  If you have, well, you've probably already got a ticket.

PINEAPPLE CLUB
So last year, I took a flier and went, on my sister's recommendation  to see DANCE ANIMAL.
It was fabulous and I stayed awake through the whole thing after 11:00 PM on a school night.  At my age, that means it's a great bloody show.

SHE GREW FUNNY
Chris Earle (Radio 30) directs Joanne O'Sullivan in a story that intrigued me.

As the survivor of a broken engagement myself, I'm thinking about DISENGAGED, also at this venue.  I'll see.

Adam Bailey (ADAM BAILEY IS ON FIRE!) and Laura Anne Harris ( PITCH BLONDE, THE HOME-MAKER) team up to tell the story of  French painter, Henri Rousseau.  I'm an art history buff and - full confession - Harris directed me the last time I toured - so I'll be seeing this.

SNAP!
A bunch of terrific Toronto actors team up to do a dark comedy.  Hey, it's next to the beer tent, so you don't tell me you can't find the venue.

VENUE #32  FALLING ANGEL
Bruce Hunter is in this and that's a good enough reason for me to recommend that you check it out. Carolyn Azar directs this show which takes place al fresco - in Shaw Park - CAMH.

VENUE #33 LYSISTRATA
The ladies of Greece put the booty thang on lock-down until the men-folk stop being at war.
My Fringe experience is never complete without seeing some bunch of young things take on Greeks.

OK,  I need to order tickets and work out my schedule.  I'll see you in the beer tent - which is now at the south-east corner of Dundas and Bathurst, behind the Scadding Court Community Centre.

For show schedules and tickets go to: www.fringetoronto.com

Posted by Celeste Sansregret at 3:55 PM No comments: