INTERVIEW: Sandra Shamas is Back! This Time, There are No Rules!

It all started with a couple of wild turkeys.  And no, Sandra Shamas is not talking about bourbon shooters.


"They were in my yard."  She lives in the country. I ask about the impact of rural life on her as an artist.

"Well, the move took a lot of creativity!  It evoked my adaptability.  You're constantly adjusting to new conditions.  Some days just getting from the house to the barn is an adventure. I have to trust myself."

Shamas' career began long before the turkeys showed up.  Her phenomenal success started  in 1987 when she won a slot in the Edmonton Fringe.  This was back in the pre-lottery days, when it was first come, first served, and hopefuls lined up to get a place.  She had an hour slot and an idea for a show: but she didn't have a play.

"I knew it was about a relationship - and I knew the end: we fall in love.  I knew there was a break-up in the middle and a week in stinky pajamas, crying on the phone with  your girlfriends.  And I knew when he came back, when I looked beside the bed in the morning at the pile of his clothes on the floor from the night before, there was going to be laundry."

Shamas figured out the rest on the plane to Edmonton. The result,  MY BOYFRIEND'S BACK AND THERE'S GOING TO BE LAUNDRY was described by one male critic "as a woman having a conversation at a kitchen table". He meant it derisively.  Who wants to hear some woman talk about her life in an intimate way?  It was an instant hit.

"I took it (his critique) as a great compliment.  I wanted to speak about the culture of women - and women talk at the kitchen table."

For legions of woman, young and old, who have spent most of their lives having some man or other talk at them, not to them, Shamas was a voice in the theatrical wilderness. The show she came up with on that fateful trip to Edmonton marked the start of a career that has spanned 30 years, many more hit shows and packed theatres across the country, including an eight week sold-out run at Toronto's Winter Garden Theatre.

This time, Shamas has chosen the Paula Fleck Theatre at Harbourfront. "I wanted an intimate venue. The Fleck is 441 seats:  half the size of the Winter Garden.  And it has soft seats - soft seats are very important at our age."

There's always plenty of laughter at a Shamas show, although she doesn't see herself as a comedian.  "I see myself as a truth-teller.  Truth-telling is primary - and the truth can be funny."

When Shamas gets hold of it, the truth can be hilarious:  also, painful, enraging, thought-provoking and very moving.

Back to those wild turkeys:  four years ago, Shamas was standing at her kitchen sink doing the dishes in her rural Ontario kitchen, looking out the window at the birds and thinking about a conversation she'd had at a dinner table the night before.

"I was the MC at a local charity event.  It was chaotic:  you know the kind of thing run by people who control by chaos? I was seated at a dinner table with several couples.  An 89 year old woman asked me, "Where's your husband?"  I said, "I don't have a husband."  She said, "What do you do all day?"  I realized she thought of her husband as her job.  This got me thinking:  how do we as women see our relevance in society as we age? If we want a partner at this point, what would we want that to look like? What do want the next 30 years to look like?"

Very few women in Canada have had lengthy and successful careers as monologists. Touring and child-rearing are nearly impossible to reconcile.  I suggest to Shamas that at the point when many women start to have career momentum, they drop out to have children. This issue continues to affect women's careers in many professions.

"I didn't have kids. My niche was to amuse the women who were having those kids. Now those kids are grown up and they come with their moms and their aunties and grandmas and form part of my audience."

We talk about how things are - and aren't different for younger women.

"We're in a period where women's rights seem to be regressing. Women are marching in the streets over blatant sexism:  Trump, Ghomeshi. Like marching, theatre is an expression of solidarity."

How does she see her relationship with the audience?

"I'm trying to ask the audience questions. Theatre is a communal experience.  We come together to have a shared experience, a shared catharsis. We're all in this together."

What's changed  for her personally as a performer, in 30 years?

"My memory. It's not as easy to remember 55 minutes! I have a special word now for the start of each piece.  I've given up certain things:  no caffeine, no alcohol."

How does she see the next 30 years of her life?

"I'm re-calibrating my direction. I have my independence, a life worth living that gives me things worth talking about.  Helen Mirren said, "There are no rules over 60. I want to see what it's like when there are no rules." 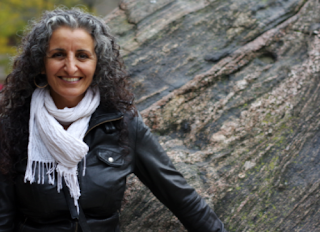 Everything But the Kitchens Inc. presents


Posted by Celeste Sansregret at 3:24 PM No comments: