The first thing that struck me when I walked into The Citadel for THE DAMAGE DONE last week was the smell of fallen leaves.

The stage is covered with them, drifts and piles of them.  Collapsing beauty, decay, loss, remorse, and nostalgia for the long past autumns of childhood are all evoked by the dying foliage bathed in a golden light, courtesy of Guiseppe Condello .

At the back of the stage hangs an industrial window, the frame rusted, the panes dirty with one visibly cracked.  Downstage, a man in middle age uses a park bench as a balance beam, walking the planks with his arms out, then pitching pebbles at the fractured pane of glass.

This is Bobby (Wes Berger) and he's here to meet his childhood sweetheart, Tina (Sarah Murphy-Dyson) at their old haunt, a park in the working-class neighbourhood where they grew up. She's asked to meet to see if he will take their two girls for awhile, while she goes away to get straight.

If you're a George F. Walker fan (and I am) you've met Bobby and Tina before.  THE DAMAGE DONE is the third play in Walker's trilogy about the estranged couple and their travails.

In the earlier plays, TOUGH and MOSS PARK, Tina and Bobby are a young, off-again, on-again couple, struggling to face parenthood.

Nearly 20 years later, Tina has boot-strapped her way out of a childhood of abandonment and privation.  She's married a lawyer, got a house, gone back to school, become a social worker, raised two kids - and become an addict.  Bobby, a dreamer and petty criminal has gone in and out of work, and in and out of his children's lives. He's trying to write, and dreams of a life without the drudgery of manual labour.

Walker shows, as Dickens did, what poverty does to people. The stress created by insecurity about having one's most basic human needs met traumatizes survivors.  Poverty may be behind Tina, but the fear it has created in her has never gone away.  In the aftermath of a break-up, it's threatening to engulf her. Bobby, underemployed and slacking, looks like a disaster, but Tina is the one who is falling apart inside.

Berger and Murphy-Dyson have great stage chemistry and inhabit their roles with an authentic physicality, nicely enhanced by Ken Gass' confident, understated direction.

As always, Walker and Gass  underline the warmth and humour,as well as the challenges and sorrows of Bobby and Tina's troubled relationship and their messy, imperfect lives.

THE DAMAGE DONE is a clear-eyed and impassioned look at the  long-term consequences of an impoverished childhood. I had tears in my eyes at the end of the night.

Diana Tso revisits a particularly ugly aspect of the Second World War: the so-called "comfort women". Chinese and Asian women were captured by the Japanese Imperial Army and brutally used as sex slaves by Japanese troops.

Tso uses the frame of a famous Chinese story, THE BUTTERFLY LOVERS to underpin the love story of Li Dan Feng and Zhou Ping Yang, who cannot be kept apart: not by class differences, parental opposition, or the truly awful catastrophe of war.

Viki Kim and Jeff Yung are very affecting as the star-crossed lovers. The rest of the cast does a fine job in a multiplicity of roles, handling the tonal shifts and physical demands of the various characters with great dexterity. I particularly enjoyed Oliver Koomsatira as Ping Yang's faithful and mischievous cormorant.

I felt the second act could have been trimmed a bit, but the ending was heartfelt with out being in any way sentimental or cloying.

The play is not only an homage to the survivors of the comfort women's horrifying ordeal, it's a powerful plea for an end to war.
Aleppo ran out of food this week. The cries for an end to violence can't be loud enough.

These two new Canadian plays by smaller,independent Toronto companies are both well worth checking out. 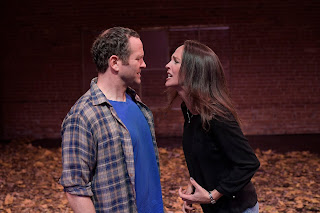 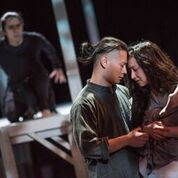 Posted by Celeste Sansregret at 10:24 AM No comments:

Called "the best small-scale contemporary ballet company in Canada" by the Globe and Mail, (2012) ProArte Danza has been presenting its unique fusion of ballet and modern dance  in Toronto since 2004.

I've seen the company several times now, and I've never been disappointed.  The talent of the dancers and the strength of the repertoire are both consistently first-rate.

Campanella's Fearful Symmetries employs American composer John Adams' composition of the same title to underscore an exploration of the choreographer's own experiences as a young immigrant arriving to Canada from Italy, against that of the current generation of young artists, with particular attention to the influence of urban aesthetics and pop culture on both.

Robert Glumbeck's Diversion examines various departures in life, both expected and unexpected, with the company of eleven dancers performing to an electronic score by Britain's Marconi Union.

I have seen fragments of this work in rehearsal in the studio and it was both charged and beautifully danced.  I can hardly wait for tonight's performance. 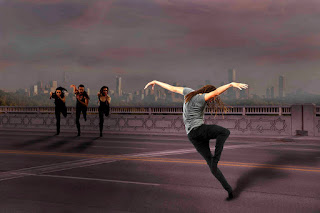 Posted by Celeste Sansregret at 10:24 AM No comments:

REVIEWS: ACQUIESCE at FACTORY and CONSTELLATIONS at CANADIAN STAGE Contemplate This Life - and the Next

It's November.  Even on a sunny day in Toronto, there's not much light, at least not for very long. Brief and golden when it comes, grey and dismal on the overcast days: by 5:00 PM it's dark.

Maybe it was contemplating November,the month of Remembrance Day and Dia de los Meurtes that has encouraged so many of Toronto's theatres to open their seasons with meditations on death and its aftermath.

In ACQUIESCE, currently at the Factory, David Yee looks at the relationship between an estranged father and son in the aftermath of the father's death. The play begins when the son is tricked by a distant cousin into coming to Hong Kong to bury the father he avoided his entire adult life. Sin hated, still hates his father. He's also much more like him than he wants to admit.

What do we get from our parents? As we, and they, age, what do we owe them?  Duty, devotion, charity, compassion?  What do we understand about their lives, really?

Sin has run, no, fled his past, but he hasn't escaped it and it threatens to overwhelm him.

It's a familiar journey; the angry young artist rebel son making peace with the ghost of a controlling and demanding male parent. Thanks to sure the directorial hand of Nina Aquino, a lovely design (Robin Fisher, sets, Monica Lee - props) and gorgeous lighting by Michelle Ramsey, ACQUIESCE feels like a fresh look at a universal human story.  It's beautifully and inventively told.

Aquino fills suitcases with luminous images: the shimmering detritus of the inescapable past.  She also makes great use of the Factory's often difficult mainstage, using its depth to move the action forwards and backwards in time.

While the play is deeply affecting,  it also has moments of flat-out hilarity: a talking stuffie in the form of Paddington Bear, Kai's obsession with face cream.

The cast:  Yee as Sin Hwang, the author, John Ng as his old-school Chinese immigrant dad, Richard Lee as Kai, the Hong Kong cousin and the embodiment of filial piety and duty, and Rosie Simon as Sin's long-suffering girlfriend, Nine all do fine work here.

Yee initially wrote this play as a much younger man.  The first act could have easily lost 15-20 minutes and never missed them.  It's a minor fault with a moving, heartfelt story about fathers, sons and families. The Factory's 16-17 season is off to a very good start.

Love, loss and string theory are currently on the boards over at Canadian Stage where  CONSTELLATIONS, British playwright Nick Payne, gets a Toronto production.

Ostensibly, the play is a human exploration of a scientific theory. If there are other universes, could there be one in which someone who is dead here on earth, is alive somewhere else?

The conceit of the play is this:  a man, Roland  (Graham Cuthbertson) and a woman,(Cara Ricketts) come together and drift apart, through a series of repeated scenes, played for different emphasis and effect.  Their choices within the scenes determine the range of outcomes.

You can see why actors love this play. It's really an extended acting exercise.


I've seen other plays written using the same construction. Toronto playwright, Erin Thompson had a hit on the Fringe with MEET CUTE  two summers back, which I think worked a lot better dramatically than this beautiful to look at, but oddly chilly production.

As a theatrical examination of human relations and theoretical physics, CONSTELLATIONS can't hold a candle to say, COPENHAGEN or POSSIBLE WORLDS. In spite of a gorgeous stage production, CONSTELLATIONS is also not a particularly engaging love story.

Hinton and his design team create an exquisite visual allusion to our planet's place in the universe: a tilting platform floating adrift in the cold, beautiful heavens.  The opening stage picture  with its wash of clouds and the mirrored back wall suggesting infinity is utterly arresting. The live cello accompaniment by Jane Chan underlines the action with an aching loveliness. The staging is fantastic.

The couple at the heart of the piece, alas, don't have much chemistry onstage. In a measure that further distances the audience from the material, they eschew the British accents written into the dialogue and perform them in good old Canadian, a decision I always find distracting.

The conceit of CONSTELLATIONS is much better as theory than as theatrical practice, although it's worth checking out for Hinton's fine production of an OK play.

AQUIESCE continues at the FACTORY THEATRE until NOVEMBER 27th: For times and tickets go to:  https://www.factorytheatre.ca/what-s-on/


Posted by Celeste Sansregret at 12:13 PM No comments:

REVIEW: Coal Mine' Theatre's BREATHING CORPSES is SPOOKY and SHARP

It's a perfect late autumn entertainment: a dark elegiac meditation on mortality, and the effect one person's death can have on the people around them, even those who never knew them in life.

A group of seemingly unconnected characters are impacted by a series of violent deaths: a suicide and two murders.

Wade's play is elegantly constructed, smartly written, and filled in equal measure with difficult relationships and dark humour.  Here, doors are a potent and chilling metaphor. Do you really want to know what's on the other side?

Director David Ferry and his talented cast: Simon Bracken, Erin Humphry, Kim Nelson, Johnathan Sousa, Benjamin Sutherland, Severn Thompson and  Richard Sheridan-Willis skillfully enrich the inter-connected stories with their performances, bringing individuality, poignancy and charm to each  character and relationship.  I particularly enjoyed Erin Humphry's turn as a chambermaid in a semi-sketchy hotel. Is the sparkle in her eye the twinkle of charm, or the glint of pathology?

As always at Coal Mine, the show makes excellent use of the minimal space, in great measure due to the excellent set design by Steve Lucas.

In his notes in the program, Ferry muses on the difference between determinism and chance in the matter of death. Certainly none of us will live forever: that much is determined. The rest?  Wade's twist of an ending left me in shock:  horrified and laughing uncomfortably at the same time.

BREATHING CORPSES is a very entertaining night of theatre: especially if you like a walk on the scary side of the street. On a dark, wet November night, is there any other side?

BREATHING CORPSES continues until November 13th at the COAL MINE THEATRE,  1454 Danforth Avenue from Tuesday to Sunday at 7:30 PM with a matinee on Sunday at 2:00 PM. For tickets and further information go to:  www.coalminetheatre.com


Posted by Celeste Sansregret at 7:11 PM No comments: