At 8:30 AM on the last week of school before the Christmas break, Eponine Lee took  some time before she left for class to speak with me about her star turn, this holiday season, in TAILS FROM the CITY at EVERGREEN BRICKWORKS.

Not only is she the star, but she was also the playwright's muse.  "My aunty Majorie (Chan) wrote the play for me," she explained during our breakfast on the phone chat last week.

Her father, Richard explains that aunty is an honorific.  Marjorie Chan and Lee's mother, director Nina Aquino are long-time friends and colleagues. Though the role was created with her in mind, it wasn't handed to her.  Eponine had a four hour interview with the show's director, Jennifer Brewin before being selected to take on the part.

It's not Eponine's first acting gig.  She was in CARRIED AWAY ON THE CREST OF A WAVE, at the Tarragon two seasons back.  She's also been in two plays at school.

Acting outdoors is different, she tells me.  For one thing, she has to run from scene to scene.  "The audience gets to walk, but we run." I ask about her favourite part of the play. " Oh The Wild Dinner Party! " Her character,  Bille has dinner with a fox, squirrels and, it being Toronto, a raccoon. "There's real food.  Carrots, buns and chips." Then she explains, "They're not REAL wild animals.  They're actors."  Has she seen any real wild animals at the Brickworks?  Yes, squirrels, birds, but so far, no raccoons.

When she's not acting, she's reading, playing with her toy Yorkie and hanging out with friends and family. She has quite a broad taste in literature.  We discussed everything from Geronimo and the Kingdom of Fantasy to Charlotte's Web and Archie comics.

Miss Lee is not neglecting her studies.  She only missed two days of school during the strenuous tech period.  Otherwise, she was a full-time student with a full-time job until this weekend, not an easy task for an actor of any age.

She does get a few days off at Christmas.  What would she like for Christmas, I wondered?  Shopkins, an armadillo puppet, and a little dog on a leash.
There are rumours Santa puts in an appearance in TALES... I hope Eponine got a chance to tell him what she wants: or perhaps he'll read this post.  She's certainly been a good, hard-working girl this season, and I think she well deserves a few treats, along with a rest, and some time with her family. After Boxing Day she continues performing until the 30th.  I can't wait to see her! 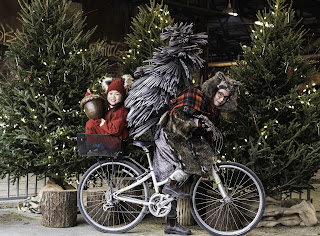 Posted by Celeste Sansregret at 2:10 PM No comments:

Finally!  The pervasive gloom that characterized the start of the Toronto theatre season has lifted and the hallowed and gracious time has begun.  Seasonal jewels for every taste and pocketbook are currently sparkling on stages all over town.  Many of these events are family-friendly, so if you need to get out of the house with the kids and encourage synaptic activity, here's your chance!

Ross Petty has brought the great English Music Hall tradition of the English Christmas panto to Toronto for the past 20 years. This year Petty and his talented cast and crew offer PETER PAN IN WONDERLAND. Petty has chosen to play Captain Hook as his swan song, and I'm sure he'll be in fine form. I haven't seen it yet, but the press on it has been very good, and I always find Petty's shows flat-out fun.

Down the street, just behind the Eaton Centre, at the Church of the Holy Trinity, THE CHRISTMAS STORY runs this weekend and next.  A choir subs in for the Heavenly Host in this re-enactment of the New Testament story of the birth of Jesus. There will be a real baby in the starring role, always a bonus! Some performances have sign-language interpretation.  It's a pay-what-you-can event, so it is wallet, as well as family friendly

Over at the Brickworks, Common Boots Theatre is presenting a play performed outdoors, TAILS FOR THE CITY, with raccoons, squirrels (well, actors playing raccoons and squirrels, though at the brickworks you never know!) and eight year old star, Eponine Lee as a young girl who escapes to have a Christmas Eve adventure with some furry friends.  There's a rumour that Santa may put in an appearance! A shuttle bus from Broadview station will take you to the theatre, and  there's hot chocolate on hand to help keep you warm once you arrive.

Over at the Red Sandcastle Theatre in Leslieville, John D. Huston and The Madrigals perform Charles Dickens' own version of A CHRISTMAS CAROL.  Huston has been touring Canada with this production for 23 years, delivering the beloved text in the persona of the author himself. Huston bears a remarkable resemblance to Dickens.  I have seen this production many times, and I never tire of his fine performance of Dickens' tale of Scrooge's reformation. His Toronto shows with The Madrigals' beautifully harmonized period music are always an extra-special treat.  Huston is joined by various well-known folk musicians in venues across Canada this month, including the National Arts Centre's 4th Stage. He frequently sells out, so book a ticket sooner, rather than later.

Tear yourself away from shopping, wrapping, cleaning and fretting over the to-do list for a few hours, and go and enjoy at least one of these fine productions. You'll be glad you did.

THE CHRISTMAS STORY continues on Fridays, Saturdays and Sundays,at THE CHURCH OF THE HOLY TRINITY ( behind the Eaton Centre)  twice each day at 4:30 & 7:30 PM.   Reservations are strongly recommended.  http://www.thechristmasstory.ca or (416) 598 4521 for tickets or further information.

A CHRISTMAS CAROL plays at The RED SANDCASTLE THEATRE, 922 Queen Street East  at 7:30 PM on December 14th and 15th with other dates across Canada. http://www.dickensperformer.com  for further information or call (416) 845 -9411 to reserve tickets at the Red Sandcastle Theatre.


Posted by Celeste Sansregret at 11:46 AM No comments: