With the help of a talented and devoted group of colleagues, a disgraced theatre impresario raises a small fortune and gambles it on a bid to redeem his reputation and his career: but, will his madly ambitious new musical be a hit?

SOUSATZKA's backstage story is crystal clear.  We know who the protagonist is, what his stakes are, and what he must do to achieve his goal.

Unfortunately for Mr. Drabinsky and his cohorts, the same can't be said of the production at the centre of the current chapter of his personal drama.


I saw SOUSATZKA twice: once in early previews and again on opening night.  I wanted to see how a team of world-class experts develop a new show for Broadway.

Apparently they move things around, make some cuts, and then add more scenes.

In a program note insert provided opening night, we are told that Mr. Drabinsky's vision was to bring the Jewish diaspora of pre-WW II Eastern Europe and the South African anti-Apartheid activists in exile together in one show.

The source material onto which  Mr. Drabinsky's ambitious idea is fused is a 1962 novel,"Madame Sousatzka" by Bernice Rubens.  No South Africans appear in the novel, nor does the Holocaust.  The novel is about a compelling eccentric of a Russian piano teacher training a Jewish child prodigy who is torn between loyalty to his clingy mother and loyalty to his demanding music teacher.

So; an ambitious concept has been superimposed onto a novel about something else altogether, and then was turned into a musical, with a score written in several styles, by different composers. Richard Shire is credited with the music and Richard Maltby Jr, with the lyrics, and additional music created by Lebo M. who provided the South African music in LION KING.

There's a lot to admire about SOUSATZKA: a fascinating protagonist wonderfully played by a brilliant Broadway star, impassioned performances from a talented cast, beautiful choral singing, skillful ensemble work, a fine orchestra and some gorgeous costumes by Paul Tazewell.


Alas, the show's unwieldy book by Craig Lucas is a mess. It has more plot lines than a Brazilian soap opera and there's a musical number - or three - to go with every one. There's sixteen numbers in Act One and seventeen in Act Two. SOUSATZKA is cluttered, clunky, manipulative and way too long. The direction by Adrian Noble is uneven.

The show desperately needs forty-five minutes to an hour's worth of cuts.

The prologue, set in South Africa is straight exposition, awkwardly staged. The Holocaust memorial scene at the end of Act One comes hard on the heels of a skin-crawling rape scene that feels exploitative. A Christmas sequence in Act Two is lovely to look at, but does nothing to move the plot forward. There's a scene in a punk club inexplicably underscored by a sugary pop dance tune. The DJ would have been beaten up by the crowd in the Queen St. West punk clubs of my misspent youth.

The current messy state of the show is no fault of the excellent cast.  As Madame Sousatzka, Victoria Clark shines like the Tony award-winning star she is.  She brings the ambitious, cultivated, troubled and eccentric Sousatzka fully to life, both emotionally and physically.  Her lush soprano voice fills the theatre.  She also has the best-written part in the show.

Her prized pupil, Themba, fares much less well. Jordan Barrow is a talented guy who unfortunately only gets to mope around the stage asking "Who am I" over and over, mime playing the piano (Why, why, why?  Why not have the actor playing the role of a musical prodigy actually play the piano?) and sing a couple of the worst songs in the show. "Gifted" is absolutely painful.

There's a side plot line where Themba has a white girlfriend who's a dancer. The story is underdeveloped, goes nowhere, and was responsible for one of the most cringe-worthy moments of the night. Virginia Preston, who is lovely, talented and deserving of a whole lot better executes a horribly choreographed solo in a two-piece red spandex hooker-wear outfit, straight out of an American Apparel ad. The only thing she's missing is a pole.


The habitues of Sousatzka's boarding house: punker and good-time girl Jenny (Sarah Jean Ford); Mr. Cordle, an osteopath and former actor (Nick Wyman); and Sousatzka's childhood friend, The Countess (Judy Kaye) are all well-drawn and delightful and charmingly played. Kaye and Clark's friendship and old history leads to one of the best musical numbers in the show, the moving "Let Go".

The whole South African plot-line is poorly developed, as are most of the South African characters. They are under-used, under-written and awkwardly integrated into the action of the show. It's a terrible waste of talent.

Naledi (Fuschia!)is an interesting character, played by a compelling actress with a gorgeous voice. We hardly get to see or hear her. Ryan Allen is terrific as Themba's imprisoned father Jabulani Khenketha. His singing is magnificent. The moments when he voices the redacted letters he's written from prison to his wife and his son are some of the best in the show. At the end, it's not even clear if he's alive or dead.

As Themba's activist mother, Xholiswa Khenketha, Montego Glover sings beautifully, but her poorly -written role leaves her stuck playing bitter, strident or clingy. Why the dinner after Themba's initial failed concert isn't at her house, when she was the one doing the cooking makes no sense whatsoever. She needs more nuance and more agency.

The philandering impresario Felix Manders (John Hillner) and his snobby wife (Christianne Tisdale) do fine comedic turns and actually move the plot forward. The Gilbert and Sullivan-influenced choral number in their salon is great fun, but the scene that follows goes on far for too long.

"Rainbow Nation" is a moving anthem and should be Themba's encore. It feels like the natural place to end the show.

The denouement is the result of SOUSATZKA's most problematic plot line and left me wincing at its insensitivity. If you're raped at eighteen, and you have a baby as a result of that rape, are you really going to be unreservedly thrilled when your son with the rapist turns up at your door? It's a pretty big leap from that ugly truth to a teary reconciliation.

SOUSATZKA feels more like a vision of two solitudes than the creation of one rainbow nation: three, if you count the creators' tone-deafness to gender issues.

SOUSATZKA continues at the Elgin Theatre until April 9th, 2017.  For tickets or further information go to:  http://sousatzka.com

Posted by Celeste Sansregret at 8:06 PM No comments:

Laura Anne Harris and Adam Bailey are friends, colleagues and Fringe rock stars. Tonight, they open remounts of their national hit shows, PITCH BLONDE and ADAM BAILEY IS ON FIRE in a double bill at the TORONTO CENTRE for THE PERFORMING ARTS for two nights this week.

I spoke to both of them last week as they prepared their respective remounts.

Laura Anne is coming up here from Syracuse, N.Y. especially for PITCH BLONDE. Her husband, musician Chris Peterson is completing a graduate degree tin the U.S. and she decided to join him for his final year. It's her 10th year performing the show.

Ten years! Where have you been?

"All across Canada on the national Fringe circuit. Also to FemFest in Winnipeg, to Orlando and Lancaster, P.A. in the U.S.: now that I have a green card I can go EVERYWHERE in the U.S. After touring this show off and on for ten years, going back to do it this time feels like visiting an old friend."

It's certainly a great moment to tell the story of a woman who persisted.

PITCH BLONDE is the story of Judy Holliday, the Academy-Award winning actress with an I.Q. of 170 who made a career of playing dumb blondes.

"The best performance of Holliday's career wasn't her Oscar-winner in BORN YESTERDAY: it was her testimony during the McCarthy trials. She needed acting to get out of the situation she was in. She used her perceived persona to control the interview."

" Roy Cohn, one of McCarthy's notorious associates was also one of Donald Trump's lawyers. Holliday was a woman who opposed tyranny. She was Jewish, and McCarthyism had antisemitic overtones. The alt-right is doing the same thing as McCarthy did: looking for bogey-men under the bed. "

I ask Harris what is different for her playing Holliday 10 years later. "It's more grounded. I'm more grounded. " She laughs. "I've changed the script a little bit over time. We meet her husband, David Oppenheim in this version. I wanted to show Holliday's full humanity; to honour her story and to honour her as a person."

Harris has five starred and sold out everywhere with this show. If you've never seen it before, you're in for a treat.

A few days later, I finally manage to catch up with the other half of the bill, Adam Bailey. I ask him how the double-bill came to be.

"They (Toronto Centre for The Performing Arts) asked! And Laura and I have such a great relationship."

"I am the gay son of an Evangelical Christian minister. I grew up in Belleville where my dad ran the Quinte Christian Fellowship."

"It's called ADAM BAILEY IS ON FIRE because there are people who think I am on fire: that I will be in hell for being a gay man. The play hasn't stopped being relevant. In the States, there's this perception of gay vs. religion. But I live between two worlds in this play: the world of my upbringing and my world as a gay man."

How dis his family take it?

"My family is not a worry: my sense of responsibility is towards the audience. The play is an exploration of me trying to be truthful to who I am, in every sense. It isn't didactic: there is no right answer."

Like Bailey, I had a very religious upbringing that I rebelled against as a young woman. We talk about that and I ask him, how wild was he?

"When Amish kids turn 16, they are no longer Amish by default. They get to decide. They have two years to make a final decision. Some of those kids are pretty wild for two years. I was pretty wild."

I'm Catholic. We can repent for our sins. If you're an evangelical Christian, what do you do, I ask?

Bailey is older now and he's married to his husband. I ask him where he got married. "Outside." After a pause, he continues: "One of the hardest things to talk about was respectability politics within the gay community. That stuff was important to what this has meant to me. There are a lot of harsh realities about being in the gay community."

That topic is as taboo as religion.

We are running out of time. I ask Bailey what he wants people to know about the show.

"A friend of mine came up to me after the show at the Fringe last summer and said"You made me laugh so hard and then you made me cry and now I have to hurt you!" Then she gave me a big hug."

I want to give Bailey a big hug but we're on the phone so I just wish him Merde and tell him I'll see him on Friday night. 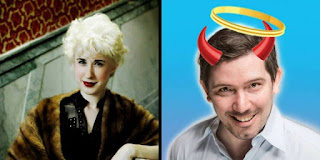 PITCH BLONDE and ADAM BAILEY IS ON FIRE are at the Toronto Centre for the Arts, Studio Theatre on Thursday March 23 and Friday, March 24th starting at 7:00 PM.  Click  HERE to order tickets.  Please note you must purchase two separate tickets for the double bill.